COMBINED VACUUM LEAK TEST AND PRESSURE IMPREGNATION GUN IN ONE

This off the shelf gun allows the user to quickly detect leaks in castings by using vacuum, without the need for expensive leak test equipment, and then immediately apply pressure to impregnate sealant into the porosity and render the casting leak tight.

Leakage in castings, particularly in aluminium die-castings, is often caused by machining operations uncovering and exposing porosity in the metal that can link up to form a leak path for liquids or gases to pass. Leaks are therefore often identified in machined through holes, blind holes and threaded holes.

The vacuum/pressure gun can be supplied with a range of nozzles and rubber washers to seal leaks in different sized machined holes. The gun is also fitted with an end cap to allow the user to push down on the gun when applying pressure to impregnate the casting.

Porosity Sealants in various viscosities can also be supplied to seal a wide range of leak rates. The sealants cure in the porosity in 30 minutes at room temperature and are resistant to heat, vibration and a wide range of acids, caustics, solvents and hydrocarbons. Excess sealant can be wiped away before curing.

In addition to the automotive OEM market, the equipment and sealants can also be used by the aftermarket industry, for detecting leaks and sealing porosity in vintage and classic car and motorcycle engines and gearboxes.

Impregnation Solutions Ltd have developed a highly penetrating sealant for the treatment of porous leaking castings. The new sealant can be applied directly to a leak area by brush or spray and naturally penetrates into the porosity (see video below).

Independent tests carried out by Birmingham University concluded the following:

“In order to be an effective sealant in metal castings the samples must display good wettability, in the form of a low contact angle, and have a low surface tension to enable penetration into the cracks. From the samples tested, which included both thermal and anaerobic curing impregnation sealants, ISL-10C was shown to be the most promising with the lowest contact angle, fastest flow rate and lowest surface tension.”

The natural penetrating ability of ISL-10C sealant removes, in many cases, the need for vacuum or pressure to achieve casting impregnation. If required, pressure can still be applied onto the sealant (for example using the Spot-Seal gun) to impregnate castings exhibiting ultra-fine porosity and very low leak rates.

In addition to the automotive OEM market for impregnation sealants, ISL-10C is also aimed at the aftermarket industry, including the sealing of leaking vintage and classic car and motorcycle engines and gearboxes. Locally heating the leak area to remove contaminants from the porosity followed by applying ISL-10C sealant will seal the pores and provide considerable time and cost savings.

Different viscosities of sealant are also available to seal the varying degrees of leak rates that occur in castings due to micro and macro porosities and shrinkage cracks. This range of sealants enables the user to achieve much higher recovery rates compared to vacuum impregnation equipment. 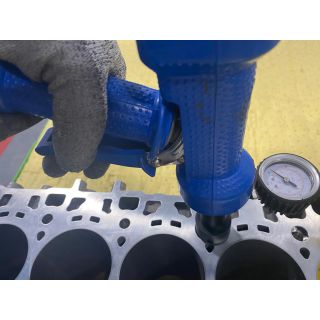 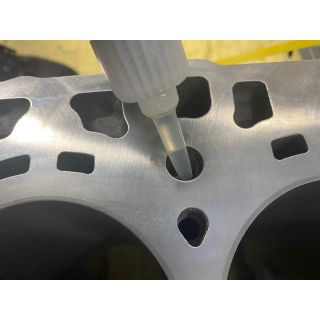 Final machining can open up porosity that is not accessible for sealing during both the casting and rough machining stages of the cylinder blocks. This results in leak test failures at the final stage of production and just before engine assembly.

This is an issue that several automotive engine manufacturers are now resolving with the Spot-Seal localised pressure impregnation process.

With final machining and assembly taking place in modern, clean and air-conditioned factories, the traditional vacuum impregnation process does not provide a practical solution due to the introduction of water, steam and chemical vapours into the working environment.

Additionally, at this stage of production, both the casting plugs and bearing caps are in place, and immersing the complete engine block in sealant risks residual hardened sealant contamination in the machined threads, oil ways and water galleries.

Apart from sealant contamination causing assembly problems and possible engine failure in the field, the additional handling of finished engine blocks through impregnation equipment can also cause damage to the machined surfaces.

Finding leaking castings at this late stage in production represents a potential significant loss in casting, machining and production time. Scrapping is a last resort, so an alternative method of impregnation is required.

The Spot-Seal process is a localised pressure impregnation process, in that it is only applied directly to the area of the casting that leaks. In many cases this can be isolated to a machined bolt hole and therefore no other part of the casting is affected. In this particular case:

1. Sealant is applied into a bolt hole where porosity and a leak has been identified 2. Pressure is applied using the Spot-Seal gun to impregnate the sealant into the porosity and stop the leak The sealant cures rapidly inside the porosity and any residual surface sealant remains liquid and is easily removed. There is no risk of contamination and damage. The process is very fast and recovery is typically 100%.

The Spot-Seal process is both manual and mobile, so can be taken to the part on the line for fast recovery and return to production or assembly. The process can also be automated for high volume applications.

A major automotive engine manufacturer has so far recovered over 2,000 engine blocks using the Spot-Seal process, producing a total saving of over £600,000 on the casting and machining value alone. The true savings are much greater when loss of production is taken into account without this solution.

Sealing porous leaking castings by pressure impregnation is the same method as pressure testing but uses sealant as the media instead of compressed air or water with the benefit that the leak is not just identified but can also be sealed at the same time.

Pressure impregnation gives engineers an alternative to vacuum batch impregnation processes by being faster, achieving a higher success rate and at a lower cost per part.

Pressure impregnation is not a new process and is detailed as an approved method in US MIL-STD-276 for the Impregnation of Porous Metal Castings and Powdered Metal Components, which was first published in 1956. This standard was updated in 1992 and is still current today. Thousands of castings have been pressure impregnated and in some cases this is the only possible method that can be used, when for example the leaking casting is too large to fit into an autoclave or is in-situ, such as on an engine in a ship.

In contrast to vacuum batch processing, pressure impregnation requires identification of the leak area and the leak rate, which is also vital information for the casting manufacturer, and allows the impregnation process to be tailored by using the right viscosity of sealant and pressure to seal the porosity. Consequently a wider leak rate can be sealed. It is a single stage process and has no cold water wash or hot water curing stages, which both contribute to the loss of sealant from the porosity and a higher failure rate.

Pressure impregnation is carried out by applying the sealant directly to the area of the casting where it leaks and then applying pressure over the sealant to push it into the porosity.  The process time is dependent on the size of the porosity, the type of sealant used and the level of pressure applied.  For example a US-MIL-1-17563 porous test ring, which is the recognised test piece for qualifying impregnation sealants, can be fully penetrated in just a few seconds using modern day low viscosity sealants and a pressure of just 2 bar. Most castings can be sealed in under a minute. Pressure cycling can also be used to achieve penetration of the sealant into very fine porosity.

The benefits of pressure impregnation:

Fast process; castings can be impregnated in <1 minute and pressure tested after 30 minutes.

It can be a single-stage process with no need for cold water washing and hot water curing.

Significant cost savings due to very low consumption of sealant.

No risk of sealant contamination in machined holes, oil ways and water jackets.

Part assembled castings or in-situ castings can be impregnated without disassembly.

Contamination such as machining lubricants and dye penetrants can be purged from the porosity during pressure impregnation to ensure a high quality seal is achieved - contaminants go unseen inside the porosity but can be the cause of poor impregnation and potential failure in service.

Room temperature curing anaerobic sealants are the best option for pressure impregnation as they react with the metal, bond to the walls of the porosity and do not shrink or exude out during curing. Any surface residue can also be wiped off as the presence of air on the surface will prevent the sealant from curing.

Pressure impregnation can be carried out using a simple Impregnation Gun, which is mobile and allows the process to be taken to the part, or the process can be automated and the equipment sit alongside a leak test machine for production operation. There is no need for a water supply, connection to the drain, steam extraction, additional process chemicals or trade effluent to factor in.

This is a fast, effective and inexpensive way to seal porosity in machined holes and stop the leakage of gas or liquid under pressure.

Bolt holes and other machined holes in cylinder heads, blocks, cam covers, carriers, sumps and other castings are prone to leakage in the automotive OEM and supply chain business. The leaks typically occur when machining uncovers hidden porosity and connects small voids through the casting wall to produce a leak path. Unless sealed, these leaks can result in the loss of coolant and oil from the engine in service causing overheating and failure.

If the specific hole/s that leak during pressure testing can be identified then impregnation can be carried out on those holes only instead of on the entire casting, which may involve sending the parts off-site for treatment.

This process is called ‘localised pressure impregnation’ and only uses a very small amount of sealant that is applied straight into the hole. After filling the hole with sealant a compressed air gun is used to pressurise the sealant into the porosity. The application time typically takes 1 minute, after which the excess sealant is removed from the hole and any surface residue is simply wiped away. The sealant cures inside the porosity in 30 minutes at room temperature. There is no surface residue and therefore no interference with subsequent assembly or finishing operations.

The Spot-Seal casting impregnation kit includes everything that is required to carry out the localised impregnation process, including a special purpose compressed air gun, rubber washers to seal against the casting when the pressure is applied and a range of porosity sealants to seal different leak rates.

The Spot-Seal kit is mobile and can be used anywhere where there is a compressed air line supply. The localised impregnation process can also be automated for production volume applications.

Localised impregnation is far less expensive than vacuum impregnation, which involves processing the complete casting through a line of tanks and incurs high energy, chemical and water costs. However, time is the biggest saving by being able to recover a leaking casting there and then.

Even assembled or part assembled castings can be sealed using the localised impregnation process. For example, a cylinder block with the bearing caps and end plugs in place will require disassembly before vacuum impregnation can take place to eliminate the risk of cured sealant contaminating the threads, mating surfaces and water galleries. This is not required with localised impregnation as the sealant is only applied to a specific area on the casting.

This is a video showing how localised impregnation works.